TULSA, Oklahoma. Under Jeff Sessions’ orders to increase penalties for gun offenses, federal prosecutors are increasingly pursuing low-level gun offenders for federal charges. Jeff Sessions has asked that the maximum possible charge be pursued and the most serious possible punishment be sought for these kinds of crimes. In the Trump administration’s crackdown on gun violence, more individuals facing low-level gun charges could find themselves facing more serious consequences. According to the New York Times, the strategy, promoted by Sessions is based on the idea that the U.S. doesn’t need more gun laws, just harsher enforcement of gun violations. 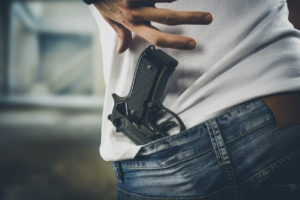 Sessions’s logic is that increased enforcement will lead to fewer instances of gun violence. Yet, reports by the Guardian suggest that lack of enforcement may have less to do with prosecuting possession cases and more to looking at how individuals with criminal records got the guns in the first place. According to the Guardian, authorities have often failed to enforce new laws requiring background checks on every new gun sale. Rather than holding people accountable at every stage in the supply chain, individuals are being charged the most harshly when they are caught possessing these guns.

If you are facing federal charges for a gun violation, it is important to understand that you could be potentially facing years in prison. Federal gun convictions come with serious penalties, ranging from individuals spending an average of 6 years in jail to 11 years when individuals face mandatory minimum charges. If you or a loved one is facing federal gun charges, you need a qualified lawyer on your side. The Henson Law Firm, P.L.L.C. are Tulsa, Oklahoma criminal defense lawyers who work closely with individuals facing a range of charges.

In fact, if you have a felony conviction on your record or are under probation and are caught carrying a gun, you could face federal gun charges under Sessions’s most recent directive. While small-scale gun charges were once handled by state or local prosecutors, federal prosecutors are now taking an interest in small-scale gun possession cases. Some worry that prosecutors are looking to meet quotas and numbers rather than fighting crime or focusing their efforts on large scale crimes.

The new enforcement priorities can be concerning. While research indicates that increased background checks reduce gun violence, there is no research that indicates that throwing people in federal prison for possession actually reduces gun violence. What we may see, are more people in prison but no decreases in gun violence. There remains no national law requiring background checks on firearm sales, largely due to Congressional Republicans’ inaction.

If you are facing federal gun charges, it is important to protect your rights. You could be facing years in jail for these charges. The Henson Law Firm, P.L.L.C. is closely monitoring changes to federal enforcement laws and how these laws might impact individuals with parole violations and possession charges. Visit us at https://myoklahomadefenselawyer.com/ if you are facing these charges. You are innocent until proven guilty.